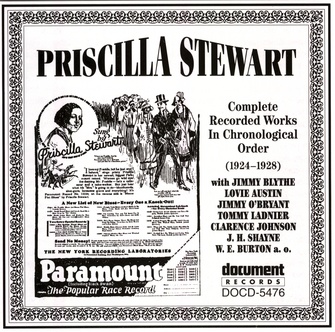 Virtually nothing is known about Priscilla Stewart. An excellent second-level classic blues singer, Stewart recorded 25 performances during 1924-1928, all of which are on Document DOCD-5476. In the majority of the cases, she is accompanied by pianist Jimmy Blythe, who is in excellent form throughout. Altoist Stump Evans and cornetist Shirley Clay make one appearance apiece, while “Charleston, South Carolina” (which is really “The Charleston”) and the two versions of “Charleston Mad” have Stewart sounding somewhat exuberant while joined by Lovie Austin’s Blues Serenaders, a quartet with cornetist Tommy Ladnier and clarinetist Jimmy O’Bryant. While basically a blues singer, Stewart shows the ability to switch comfortably to non-blues material, including “Someday Sweetheart.” Perhaps that is why she was still recording in 1928, long after the blues craze of the 1920s had subsided.

All Stewart’s recordings were made in Chicago, and most of them have piano by Jimmy Blythe. She co-wrote ‘Delta Bottom Blues’ with him, but it’s not known whether ‘I was born in Arkansas, raised in Memphis, Tennessee’ is autobiography.

Stewart starts off well, her voice nasally sulky, her attitude hard-boiled and cynical. Blythe is splendid throughout, playing grumbling, propulsive bass figures and right-hand ornaments that are both tough and pretty. Most of the pianists who occasionally take his place maintain the standard, although Tiny Parham (if it is him on the last two tracks) is disconnected from the vocal line. The trouble is that Stewart doesn’t maintain the consistently high quality of her earlier recordings. Sometimes the material is to blame, most obviously when she tries to sing sweet on the pop songs ‘Someday, Sweetheart’ and ‘A Little Bit Closer’ ‘Charleston Mad’ and ‘Charleston, South Carolina’ are uninspired, too, mostly because of Ladnier and O’Bryant’s evident boredom. There are strong, swinging performances all through the disc, like ‘Switch It Miss Mitchell’ (another dance tune, with the Charleston mentioned in passing), ‘Biscuit Roller’ with Shirley Clay’s imperious cornet, and two fine readings of J. H. Shayne’s ‘Mr. Freddie Blues’; but they shine an unforgiving light on the weaker efforts.

– from Penguin Guide To Blues Recording

“Way down on the Delta, honey that’s where I come from” , “I was born in Arkansas, raised in Memphis Tennessee”, sings Priscilla Stewart in “Delta Bottom Blues” and these lines, if at all autobiographical, are probably our only clue as to her origins. Her entire output of twenty five songs, which were recorded in pairs over a four year period, furnish no further hints and, as to her age, we can but hazard a guess based upon the ‘age sound’ in her voice.
Many of the lesser known female singers of the twenties who recorded handfuls, rather than hundreds, of blues songs were invariably professional vaudeville performers but Priscilla Stewart doesn’t seem to come into that category since no mention can be found of her appearing in stage revues of the time. The only common factor might be pianist Jimmy Blythe (real named Jimmy Louis – see RST JPCD 1510-2) who accompanied her on the majority of sessions. Blythe was the house pianist for Paramount records from 1924 until his death in 1931 and many have had a hand in organising sessions for lesser known artists like Stewart. Other than that speculation Priscilla Stewart would seem to be just another blues singing biographical blank of the twenties.
Stewart’s material was firmly rooted in the blues, rather than vaudeville, tradition. Most of her lyrics appear to have been drawn from the blues common stock such as, “On one Monday morning on my way to school, it was that morning that I really broke my mother’s rule” (“True Blues“) or even the ironic use of a lyric popular with male singers like, “Goin’ to the Nation have my hambone boiled, all these man in Chicago gonna let my good hambone spoil” (“Going To The Nation”). The reference to Chicago was probably for the benefit of potential purchasers in the Wind City, as too was the number, “Mecca Flat Blues“, inspired by the four storey apartment building of the same name which, by the mid-twenties, had become an overcrowded slum despite its expansive courtyards and ornate wrought-iron balconies dating back to the turn of the century when it was the pride of Chicago.
Priscilla Stewart, like many of her contemporaries, obviously wasn’t beyond being persuaded to capitalise upon popular themes as indicated by her various renditions of the “Charleston” , “Mr. Freddie’s Blues” (the accepted nickname for pianist J. H. Shayne), the Spikes Brothers’ Tin Pan Alley composition “Someday, Sweetheart” or the topical “P.D.Q. Blues“. “P.D.Q.” was originally an instrumental recorded in November 1926 for Victor by cornet player Thomas Morris. The following month the copyright holders ran a competition to find lyrics for the tune, even offering a prize of a Radiola. On February 12th, 1927 the Chicago Defender announced that the winning lyricist was John Simson. Given the subject matter of the song, Mr. Simson must have misunderstood P.D.Q. to be a railroad (like P.P.B. for Pennsylvania, Poughkeepsie & Boston), rather than the common abbreviation for ‘pretty damn quick’ ! Nevertheless, in March Vocalion recorded the song with Clarence Lee fronting the Clarence Williams band and Paramount followed shortly afterwards with Priscilla Stewart’s rendition. Paramount undoubtedly hoped such topicality would bring vast sales but it is unlikely that the recording achieved such – it certainly didn’t bring the singer any fame.
Priscilla Stewart’s recording career was brief and unspectacular and although she may not have been in the same league as many of her famous contemporaries, somebody at Paramount thought it worth the company’s time and investment to record her. That being the case she certainly deserves the belated recognition that this release will hopefully bring.

By courtesy and permission of our friend Alan Balfour.

“On tips from his arrangers or by following the theatrical columns of the Chicago Defender or Whip, (J. Mayo) Williams frequented local vaudeville houses in search of talent. Often he stood backstage to monitor the crowd reaction to an artist. One of his gimmicks was to attend blues-singing contests held in Chicago theaters and seek out the runner-up contestant in the belief that the singer in question would be less demanding and difficult to deal with than the winner. (Using the same strategy, his assistant Aletha Dickerson collared Priscilla Stewart and Jimmy Blythe in St. Louis.)”

– from “R&B, Rhythm and Business: The Political Economy of Black Music”  by Norman Kelley.

For any transcriptions requests please write to : DuoArtMusic@aol.com