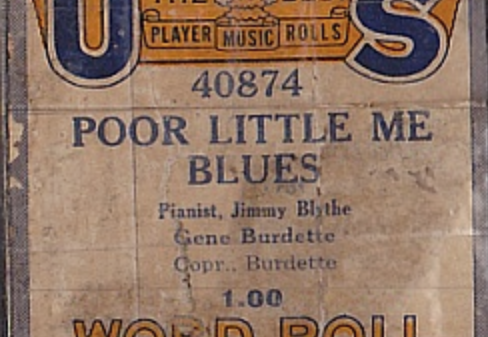 He was born in Louisville, Kentucky, United States, and moved to Chicago, Illinois around 1916, studying with pianist Clarence M. Jones. He was an all-round pianist, who generally incorporated boogie-woogie styles into more varied pieces such as “Chicago Stomps” (1924) which drew on ragtime and other popular styles of the time.

He made hundreds of piano rolls in the early 1920s, for the Columbia (later renamed Capitol) Music Roll Company in Chicago, before accompanying many singers on Paramount Records and appearing with small ‘spasm bands’ like the Midnight Rounders and the State Street Ramblers. He also duetted with Johnny Dodds, and led his own group, Blythe’s Sinful Five. His 1925 recording, “Jimmy’s Blues”, provided the theme used by Pinetop Smith on “Pine Top’s Boogie Woogie”, and he was also acknowledged as an influence by Albert Ammons.