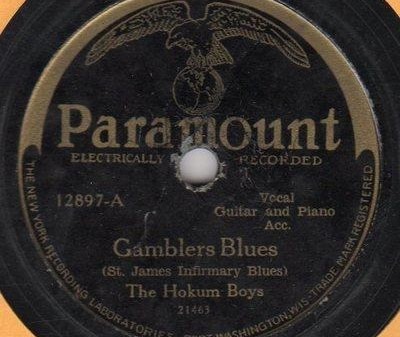 “Hokum”, as musical term, seems to have come into being (or onto record labels, at least) in the late ‘20s, with recordings by Tampa Red’s Hokum Jug Band, and “Hokum Blues” by the Dallas String Band. From 1929 to 1931 it was something of a craze, with name artists in their own right like Big Bill, Georgia Tom and Tampa Red, all participating in studio groups (these recordings will be found on the appropriate Document, Blues Documents and Wolf CDs). Paul Oliver’s notes to “Famous Hokum Boys 1930-1931” (Matchbox MSE-1014) give a good account of the word’s theatrical and musical history before then, with its connotations of verbal and musical cleverness, and of a crowd pleasing approach, not unmixed with a certain sense of superiority to the “rubes” in the audience. All these elements will be obvious in the songs collected together here: fast and fluent playing, clever doubles entendres (variably clever, it must be admitted), and a sense of belonging to an in-group are all evident.

I would suggest that the in-group here is that of professional musicians, hokum was very much a record company and studio-based creation, and the men (and occasional women) who made it tended to be full time music makers, often working as arrangers, leaders, or musical directors as well as rank and file band personnel. Aletha Dickerson, for instance, was an arranger and staff pianist at Paramount, while Jimmy Blythe, Ikey Robinson, and Alex Hill were all prominent members of the Chicago jazz scene. It has been said, and to a degree it’s inarguable, that hokum was about sexual innuendo, but that is not the only topic: these songs are also much concerned with bootleg liquor, gambling, and partying, perhaps reflecting the entertainments available to entertainers who are off the stand with a bankroll to blow. Too much shouldn’t be made of this; it’s also clear that the songs’ words do speak more widely, to newly urbanised black people adjusting to life in the ghetto, with its noisy parties held by “The Folks Down Stairs”, at which the likes of Alex Hill would play rent party solos. There were other and worse hazards, too – infidelity, bad liquor, violence, gossip, poverty and unintended pregnancy* among them (“Some men go down to 29th Street, Catch the women hard up, get their lovin’ cheap; six months later they can hardly walk, The trouble they get in makes the whole town talk” neatly combines the last three). None of these difficulties was unique to the urban North, perhaps, but hokum’s response to them was flippant, would-be sophisticated, and nothing if not streetwise. “T’ain’t no big deal” perhaps sums up hokum’s view of the world.

To present day listeners, hokum may seem rather monotonous, with the same songs, as well as the same themes and puns, coming around and around; but it needs to be remembered that these recordings were sold as two-sided 78s, not 20-plus track CDs, and were bought by people who could often afford only the occasional purchase of such a frivolity. With that in mind, tolerant listeners will find much to enjoy, particularly in the accomplished musicianship of the participants. Their identities are often difficult to establish, and Gennet file information is not especially reliable, but Tom Tsotsi’s discussions in “Joslin’s Jazz Journal” are perceptive and persuasive. Like Bob Robinson, Dan Roberts remains a biographical mystery, which is a pity, for he was an excellent guitarist, seemingly influenced by Big Bill Broonzy, but also aware of jazz guitar, and the revolutionary changes that Eddie Lang and the electric microphone were jointly bringing to it. Banjo Ikey Robinson was even more up to date with stylistic trends; his fast plectrum picking, on a guitar strung with a high action for extra volume, is the hallmark of an expert band musician, who’d already worked with Jelly Roll Morton, although his subsequent career tended to be with bands, like Wilbur Sweatman’s and Noble Sissle’s, whose music was jazzy rather than jazz. Robinson, born in 1904, also played clarinet, by the way, just to cheer up the “everybody is everybody else” school of discography when listening to the September 1929 titles, and to my ears, he’s certainly on the October 1929 sides. 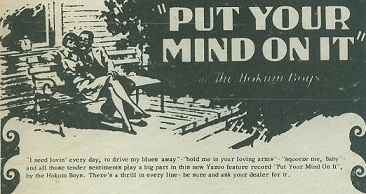 By February 1930, Banjo Ikey was in New York with Sammy Stewart’s band. If he appears on all the Hokum Boys records from September to November 1929, then presumably he wasn’t with Stewart’s band on the long trail of one-nighters that took them from a 1929 summer season in Ontario to the Big Apple. According to John Chilton’s “Who’s Who of Jazz”, Alex Hill did join Stewart in the summer of 1929, which perhaps explains why he wasn’t available to record “I Was Afraid Of That Part II” in August, so that Blind Blake and Aletha Dickerson had to be used (Stewart’s band must have played Chicago in December 1929, however, when Hill and Robinson recorded for Victor as the “Down Home Boys”; perhaps Ikey joined the band after that session). Alex hill, born in 1906, died of TB in 1937, but in his brief life he played with such illustrious names as Punch Miller, Jimmy Noone and Andy Kirk. In New York he became a staff arranger for Irving Mills’ organisation (as well as doing charts for the likes of Fats Waller and Eddie Condon), and even briefly depped for Duke Ellington when Duke’s mother died in May 1935. His own big band debuted at the Savoy in November 1935, but illness soon forced him to retire. Jimmy Blythe, born c. 1901, played his stomping piano on innumerable jazz and blues records in the twenties; like Alex Hill, he died very young, in 1931, just as the hokum craze seemed to be heading for extinction like the record industry that had created it a victim of the Great Depression. Recording and hokum both rose phoenix-like from the ashes, though: see Document DOCD-5237.

* change made upon Chris Smith’ request.