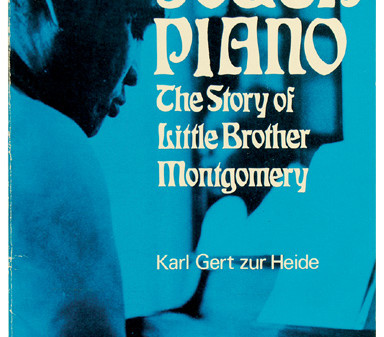 “Since Deep South Piano was written in 1970, a number of details and general remarks are out of date, and more recent research (by myself and others) made me change several viewpoints.” 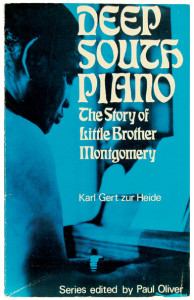 Bro’r Montgomery? He been dead and gone a long time.’ Ishmon Bracey hasn’t seen Little Brother Montgomery in more than thirty years. In 1968, the black music scene of Jackson, Mississippi, has changed drastically: Tommy Johnson, its most influential blues singer and guitarist, had died in the 1950s. The famed show drummer, Joe White, is too senile to talk. The McCoy brothers, Charlie and Joe, are dead. Others, like Walter Jacobs and Rube Lacy, have just gone. The Chatmon family is scattered all over the country. Even Butch’s Band has given up playing. And Ishmon Bracey and Tommy Johnson’s older brother Ledell have turned their backs on the blues and hold the title of ‘Reverend’. How should a local preacher, once a confrere of Tommy Johnson, know that Little Brother is very much alive up north in Chicago and still playing piano whenever there is a job?

Lack of factual knowledge favours the growth of legends, and information on black piano players from the Deep South is scarce. Literally thousands of them went unrecorded; still, an amazing body of their work has been preserved by various media. Eight years before the cabaret blues of Mamie Smith initiated the era of ‘race’ records in 1920, the first blues numbers were cut into player piano rolls – presumably by established pianists who came in touch with the idiom through the publication of sheet music early in 1912. The year of 1897 saw the public appearance of ragtime which was, unlike blues and jazz, not essentially a Southern style. Twenty years later, five white instrumentalists from New Orleans brought a strange sound into a regular recording studio: the first release by the Original Dixieland ‘Jass’ Band featured their novelty interpretation of ragtime and blues. Jazz began to flourish, and within a decade numerous forms of genuine Afro-American folk music were issued in special series aimed at the ‘race’ market. Between 1926 and 1931 especially, these ‘race’ discs displayed a great variety of material, ranging from work songs to jazz, from blues to rags, from minstrel tunes to hokum stuff, from street cries to spirituals, and from sermons to boogies.

The complexity of this field impedes a satisfactory terminology. It seems necessary, however, to define some of the terms used here. Although also performed on string instruments or by a whole orchestra, ragtime is associated with the keyboard. In the hands of accomplished Midwestern composers – black or white – it gained a European character in its melodic and harmonic structure, while it retained the rhythmic peculiarities of its Negro origin. Ragtime is marked by a stylised right-hand syncopation against a regular bass. Its three main left-hand techniques were transmitted to blues and jazz piano: stride, tenth, and walking basses.

The ‘ragtime craze’ ended with World War 1, and jazz took over. Already it had been adopted and popularised by white groups – jazz left the realm of folk music. This way of playing ‘hot’ and ‘fancy’ and ‘with plenty rhythm’ emerged in the South, in black dance bands; its focal point was New Orleans. Ragtime master and jazz pioneer Jelly Roll Morton knew what he was talking about: ‘Ragtime is a certain type of syncopation and only certain tunes can be played in that idea. But jazz is a style that can be applied to any type of tune.’

A jazz treatment would also be given to material stemming from secular and religious Negro singing. For a jazz musician, ‘let’s play the blues’ first of all means to follow a rather fixed chord sequence of twelve bars. This formula has done much to domesticate – and stereotype – the blues, a musical language in its own right. Jazz sprang from urban surroundings – the blues came from the rural South. Jazz is communal music – a bluesman may sing and play to himself when ‘the blues got him’. Contrary to jazz, blues is primarily accompanied vocal music.

The guitar always has been the favourite blues instrument, with the piano as a close second. The most distinct way of playing blues on the piano bears the label ‘boogie-woogie’. In his superb analysis, Ernest Borneman clearly states that ‘the boogie is the blues as far as melody, harmony, and length of theme are concerned’. The difference appears to be an often remarkable rhythmic diversity of both hands. Indeed it is the ostinato left hand of the player which holds the criterion: each beat – four to a measure in 4/4 time – is accented; this sets boogie apart from the oompah two-beat of stride. Slower tempi allow the use of triple inner rhythm: the second note of the triplets is usually silent, and the third represents an unaccented afterbeat. Only duple rhythm can supply eight – accented, of course – beats to the bar, which should be notated in 8/8 time. In order to secure the same weight for each within a given chord, the fingers of the left hand either stay in one position (steady bass) or ramble up and down the keyboard in little steps (walking bass), varying position with each beat. Repetition of similar or identical figures produces patterns of four or eight beats. A walk can be ‘doubled up’ by inserting afterbeats in broken octaves. The ‘Rocks’ is neither ‘steady’ nor ‘walking’; it is a triple bass which is executed by alternating two finger positions lying close to each other. The tenth and the ‘Spanish’ basses constitute borderline cases of boogie.

‘I would say that boogie-woogie was the little bad boy of the rag family who wouldn’t study’, remarked music lover Roy Carew, witness of the early days. It is true that boogie owes more to ragtime than is evident, although it still has to be decided if the known blends can be regarded as pre-boogies, or are just hybrids. In his childhood, boogie certainly did not behave according to European conventions. The archaic manifestations of Afro-American music have a modal character and, in solo forms like boogie, no continuous metre. The latter is the result of linear thinking which disregards harmony in an academic sense. In groups of several players, this conception can lead to heterophony with strict metre; a good example is archaic jazz. Even when employing a certain chord sequence a ‘country’ bluesman would make the changes when he felt like it. Used to playing alone, he shows the tendency to corrupt the harmonic and metric scheme when performing with a band. ‘He’s breaking time’, a trained musician would say.

The theme of boogie is the blues, some features derive from ragtime, and the rhythmic interplay of both hands can be traced back to African roots. But where and when did the first Negro play the blues with a boogie beat, and on which instrument? The Emancipation (1863) probably gave the impetus for the fusion of various vocal and instrumental idioms which led to the rise of the blues. It is open to question if the first piano boogie was anticipated by banjo and guitar styles with the insistent rhythm of players Iike Otis Harris or Garfield Akers. There is, however, no doubt that a number of guitarists cleverly adapted boogie piano techniques – among them Leadbelly, Robert Johnson, and Pet and Can.

The earliest reports hint at an origin somewhere between New Orleans and Dallas, Memphis and Houston, but Mississippi and Alabama also had strong boogie traditions. Anyway, the Deep South seems to be the heartland of blues, boogie, and jazz. ‘Picking cotton’ and ‘picking guitar’ is not too irrelevant an association, and perhaps another one can be established: between wood and boogie-woogie. Vast regions of the Deep South are wooded – Louisiana, Mississippi except for the Delta, and southern Arkansas. Here the main industry was, and still is, lumbering and wood processing. Towns grew around sawmills; some of their names show this: Electric Mills, Lumberton, Kentwood, Transylvania, Pineville. The resin of the pine-trees was distilled to turpentine. The different companies met their specific needs by instituting camps which would be moved when work progressed or a certain area had been exploited. The workers only left the camp, if at all, on weekends. For their recreation after long hours of toll there was a shack where they could eat and drink, dance and gamble. Similar places existed all over the country; they were known as barrelhouses, honky-tonks, and juke joints.

In the camps, the workers often supplied the music themselves, but now and then an itinerant musician dropped in – for example, Poor Joe Williams: ‘I had one route I really liked to travel, and t hit was down around Mobile, Meridian, Electric Mills, Shuqulak, and on into Alabama. I’d hit all them turpentine camps down there. They’d have oxen pulling them two-wheeled carts dipping with turpentine. Boy, they’d have a wonderful time on Saturdays in those camps. When somebody like me went through there it was like the President coming there. They’d come from all over – they hear talk of a man coming there with a guitar. They’d get real rough on Saturday night.’

Usually the camps were furnished with a piano, and it was customary to hire a player for a week or more. Many of these pianists were professional entertainers with a wide repertoire, but it did not help much to be able to sing the latest pop song, play tricky rags or tap-dance. ‘That’s all that was going for a barrelhouse – the blues’, said Walter Lewis who first played Beethoven and then the barrelhouse circuit. The blues suitable for dancing – this description fits boogie-woogie. In his boogie folio Clarence Williams, a pianist more than twenty years older than Walter Lewis, handed down the perception that boogie developed in the lumber camps, logging camps, turpentine camps, and railroad camps.

On this subject, Roy Carew commented: ‘I heard crude beginnings of it in the back streets of New Orleans, in these early years following 1904, but they were really back streets. More crude than Pinetop’s efforts, such music never got played in the “gilded palaces”.’ It was only a step from the backwoods to the back streets of the cities, but a long way from the honky-tonks to Carnegie Hall. In the Deep South, pianos could be found in all sorts of places – sawmills, cabarets, roadhouses, churches, brothels, private houses, dance halls, country jukes, city tonks – and there was always someone who could ‘tickle them keys’. It sometimes happened that the gospel pianist played in a hot dance style, that the barrelhouse man surprised his crowd with an operatic number, that the orchestral player stopped the dance with a slow blues. Through their very versatility, some of these pianists resist any categorisation – they were at home in jazz bands, honky-tonks and cocktail lounges.

Little Brother Montgomery is one of these. A fair performer of  hymns and pop tunes, an excellent traditional jazz man, a fascinating singer, Brother stands out as one of the greatest blues soloists and accompanists. Unlike most of his colleagues, he is relatively well known. What follows is his story; yet it is also the story of many others who travelled the same roads.